After an incredibly impressive first festival, Oxford’s Gathering Festival is back and it’s gone big. Let’s not forget, last year many acts were unheard of and now they are some of the country’s biggest up and coming bands. Take Bastille, Peace and Spector to name a few, they’ve all played the finest festivals and stages this year as well as releasing some smashing debut albums since last year’s festie.

Obviously you’re going to try and catch the renowned bands such as LA lads, Local Natives and critically acclaimed new kids on the block London Grammar. So we thought we’d advise you on some of the less known, but nevertheless brilliant bands. In total there are 38 acts, so although it’ll be a tough decision, make use of your time and choose wisely who you go and see.

Drenge, made up of the two Loveless brothers, have had an incredible year, both before and after the release of their debut, self-titled LP. Their punk-rock revivalist sound and explosive live sets are on to a winner; honestly you cannot afford to miss these.

Leading the modern, British psych-pop movement come Temples. Originally from Kettering, this group of pretty faced boys are spreading their near-perfect kaleidoscopic melodies echoing right through the Isles, whilst leading crowds into a trippy daze. You won’t quite be able to appreciate their brilliance until you experience it live. SO CHECK IT OUT.

Like Temples, Charlie Boyer & The Voyeurs are too signed to the ever growing, dreamy label of Heavenly Recordings. Debut album Clarietta showed of their “glamorous rock ’n’ roll”. Their sound is that of a basic garage sound, but somehow full of quirks. It’s good, fun and honest music.

From busking on the streets of Dublin, to touring the country with the likes of Jake Bugg, Irish brothers Alfie and Harry who make up Hudson Taylor have captured the essence of folk-pop. Their perfectly harmonised melodies and ability to change from energetic, crowd-involving songs, to laid back acoustic tracks is inspiring. They’ll be providing an intimate wind-down moment at Gathering this year.

Three very different female fronted bands that you need to catch are Findlay, Wolf Alice and JJ Rosa. Findlay, like Hudson Taylor, has also had the privilege of sharing the stage with the likes of Jake Bugg. Her snarling, blues-rock vocals, accompanied by her band’s rocky bass riffs will add to her set being very different from any other act at this year’s festival.

Wolf Alice will be fresh, straight from touring with Swim Deep. Their nineties girl-rock revivalist sound oozes with front-woman Ellie Rowsell’s infectious lyrics, full of mood swings and teen-like angst. Labelled as one of this year’s, most exciting new guitar acts they are certainly going to be around for a long time, so catch them while you can.

Hailing from Stockport, JJ Rosa, sound is full of every kind of music influence possible. From soul, to hip-hop, to funk and blues-rock, Jessica Rose Hancock (aka JJ Rosa) and her band are creating catchy lyrics and moody guitar riffs. If you’re up for a dance and a laugh, their set will be one to go and see.

Troumaca (friends of Peace, who took to the festival last year and never fail to recommend their fellow ‘B’towners’ to the rest of the country) released their debut album The Grace last month. Their sound can only be explained as that of a fusion of tropical, R&B, and dub. Creating their own sound (and pretty much their own genre) Troumaca will be promising a body-rippling and full-on groove set in Oxford.

It’s basically autumn now, and everyone will be experiencing post-festival blues, but with being late in the year Gathering Festival is available to up your spirits.

£25. Saturday 19th October. Oxford’s Cowley Road. You’d be stupid not to be there. 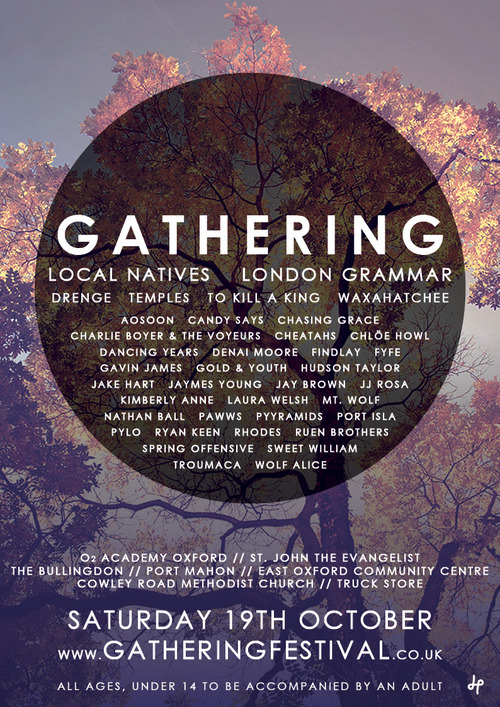