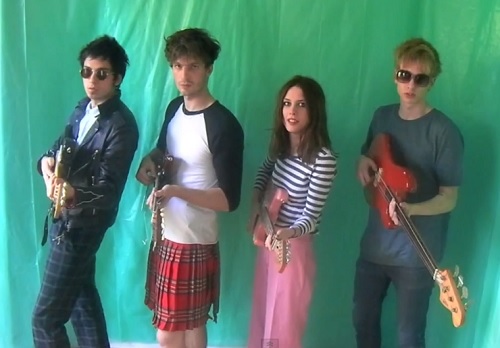 The muggy atmosphere that swamped the summery afternoon outside was not to be replicated within the old Arts Centre church of St Benedicts Street, Norwich. For this was not a capacity crowd. After Savages played a pulsating set in the same venue a fortnight or so before, the intensity was noticeably different. Of course they had an album to support in front of a crowd that knew their steady trickle of singles note for note, not to mention Savages’ formidable credentials as a live band – a reputation that has been cultivated for almost a year. Wolf Alice are a foursome only recently out of London-town, a band who radically altered their style to folk/grunge towards the end of 2012 (with the addition of a rhythm section) who have only been attracting some heat since the release of ‘Fluffy’ around February time. It was perhaps a little surprising that they were already embarking on their own tour; and that was evident in a set that did not long exceed 35 minutes.

Birmingham based God Damn were the raucous openers, splintering the stage and the amps with their aggressive combination of grunge, metal and hardcore (it’s less of an earsore than that simplistic stylistic definition would give credence to). As enjoyable and mental as the trio may have been (check out their new music video for the song ‘Heavy Money’ below) they felt like quite an incongruous opening for Wolf Alice who, surprisingly, began with ‘Fluffy’. Although it was a rousing rendition from a good live band, its impact was diluted by the abrupt opening with half the crowd facing the wrong direction when the opening chords were struck. Excitement was somehow elusive for those 35 minutes – most of the songs were good but the intensity was missing, the audience weren’t alive; it felt a little anticlimactic. I really don’t want to come down too hard on them, because they are young, their songs are really good and stylistically variable. They weren’t at their best that night; sometimes these things just happen.

Check out Wolf Alice’s latest video for ‘Bros’ out on Chess Club Records, and then freak-out at the glories of God Damn and ‘Heavy Money’ on Gravy.