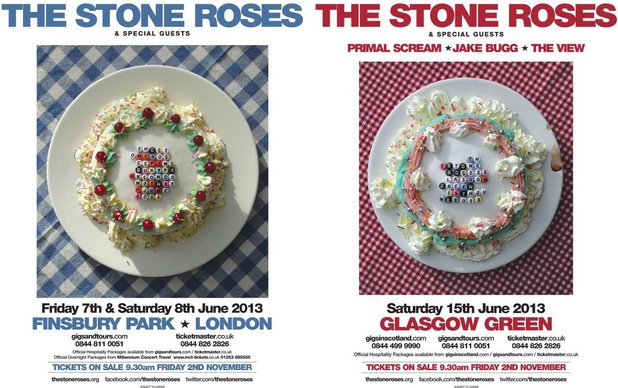 Twelve months ago the resurrection was completed. The sight of Ian, John, Mani and Reni on-stage was one that many never thought would materialize following their acrimonious implosion in 1996. Following the triumphant Heaton Park homecoming (which still holds the record as the quickest selling UK gigs of all-time) where the band played their seminal debut album plus more to 220,000 people, the band carried on riding the reunion wave until, as Ian Brown succinctly stated, “the wheels fell off”.

Whilst the Finsbury Park shows this weekend do not represent the second coming of the Roses, or even the third (Heaton Park) or fourth (the recent Shane Meadows-directed documentary Made of Stone surely takes that title), they do represent the band’s first flirtation with the capital in over sixteen years. The sense of occasion is not lost on any of the 40,000 crowd members who are all squeezed into Reni hats, Adidas footwear and paint splattered t-shirts. Unlike Heaton Park, the weather turned up for the Roses: the sun beat down all afternoon. It was a good job it did, too, as adverse weather conditions coupled with listening to John Lydon’s irrelevant and pernicious ‘singing’ would have surely led to murders in the audience.

As it was, Lydon’s PiL represented the only shoddy part of the day. The shows were organised a whole lot better than the Heaton Park shambles and despite the Roses cheekily using the same stage set-up as last year (they merely peeled off the ‘Manchester’ from the top of it), the shows didn’t merely give the audience a re-hash of last year. Miles Kane opened proceedings with his brash brand of mod-inspired rock, taking to the stage and beckoning the crowd to become lively. It worked, too, for when he entered the fray at 5:15pm many were sat on the grass sipping cider but by the end of his short set they had perked up and there were moments of movement at the front.

His set highlights included the anthemic ‘Inhaler’ (which proved how brilliant a drummer Jay Sharrock is) whilst songs off his new record Don’t Forget Who You Are fell a little flat under the enormity of the occasion. The Stone Roses weren’t the only musical legends on the bill, though, and Johnny Marr dazzled many with his artistry in a nostalgia-filled set. The former Smiths axeman blended ‘Stop Me If You Think You’ve Heard This One Before’ blended seamlessly into a surprise ‘Bigmouth Strikes Again’ before latest single ‘Upstarts’ proved a brilliant arms-in-the-air singalong. The opening riff to ‘How Soon Is Now?’ sparked life into the crowd before Marr dedicated ‘There Is A Light That Never Goes Out’ to “everybody” in the crowd and “nobody else”.

The less said about PiL and John Lydon the better, but his claim that the crowd are in “his house now” along with the statement of “don’t be scared of your uncle Johnny” coupled with the overwhelming stench of marijuana perfuming the park’s air was enough to make you quiver with nausea before The Stone Roses finally took to the stage. Mani’s rumbling opening bassline was suitably colossal, sparking Squire’s guitar in a moment of beautiful crescendo before Brown’s hushed vocal entered.

True, Brown has never been the best singer. Who cares? At concerts he is merely a conductor to a 40,000-people strong crowd. He guides their voices through the songs and up the proverbial long, gold road. ‘Elephant Stone’ was given only its third airing since the band reformed and was played for only the second time in the UK since 1990 before ‘Ten Storey Love Song’ reminded people that The Stone Roses have more than one album’s worth of decent material in their back-catalogue.

‘Going Down’ (b-side to ‘Made of Stone’) was also aired in replacement of ‘Mersey Paradise’, a decision which is eyebrow-raising at the very least, before a gorgeous rendition of ‘Shoot You Down’ which proved one of the set highlights. On record ‘Shoot You Down’ can often sound pedestrian as it is sandwiched between two monster anthems towards the home stretch of their eponymous seminal debut album, yet tonight it is elevated by the crowd and Brown’s scally growl of “I’d love to do it and you know you’ve always had it coming”.

The track also sees the first use of brilliant dynamic camera work, with lemons appearing on the screen and a visceral use of imagery. “Pick anyone up who falls down, I don’t want to see people walking like John Wayne up here” says Ian Brown before a thirteen-minute extended ‘Fools Gold’. The climactic jam at the end of the track shows just how powerful the Roses are: Reni’s drumming was imperious as Squire’s wizardry on guitar counter-balances Mani’s groove effortlessly. As the track fades out, you’d be forgiven for being a little lost for words. Then, ‘Waterfall’ seeps into a sprawling ‘Don’t Stop’ which displays the Roses’ unbeatable musicianship again.

‘Love Spreads’ is another track which takes on a life of its own when it is performed live and rubbishes claims that Second Coming was disappointing, whilst ‘This Is The One’ sparks plenty of flares in the crowd before ‘Made of Stone’ steals the show in terms of mighty singalongs. The “sometimes I fantasize” refrain echoes around the crowd and is enough to wake up Olivier Giroud sleeping nearby, before an atmospheric ‘Elizabeth My Dear’ gives way to a stomping, enchanting and palpable ‘I Am The Resurrection’. The set-closer has always been the band’s finest moment and it’s no different tonight: seven minutes of youthful arrogance intertwined with musical superiority.

“We usually come down here and leave with 3 points and a few of your best players” Mani jokes as Ian gets him in a full-nelson. The band all hug and cajole before bowing to the crowd. Like all Manchester United fans, Mani is annoyingly correct. But tonight he and his band have given something back. It may not be as special as last year, but it’s equally as enthralling. It’s hard to put into words, but when The Stone Roses are on form they seem to be devoid of expectation, convention and occasion. They deliver to their public just by simply being. Tonight is another chapter in a glorious and tumultuous career. Let’s hope the next chapter is a new album, eh?