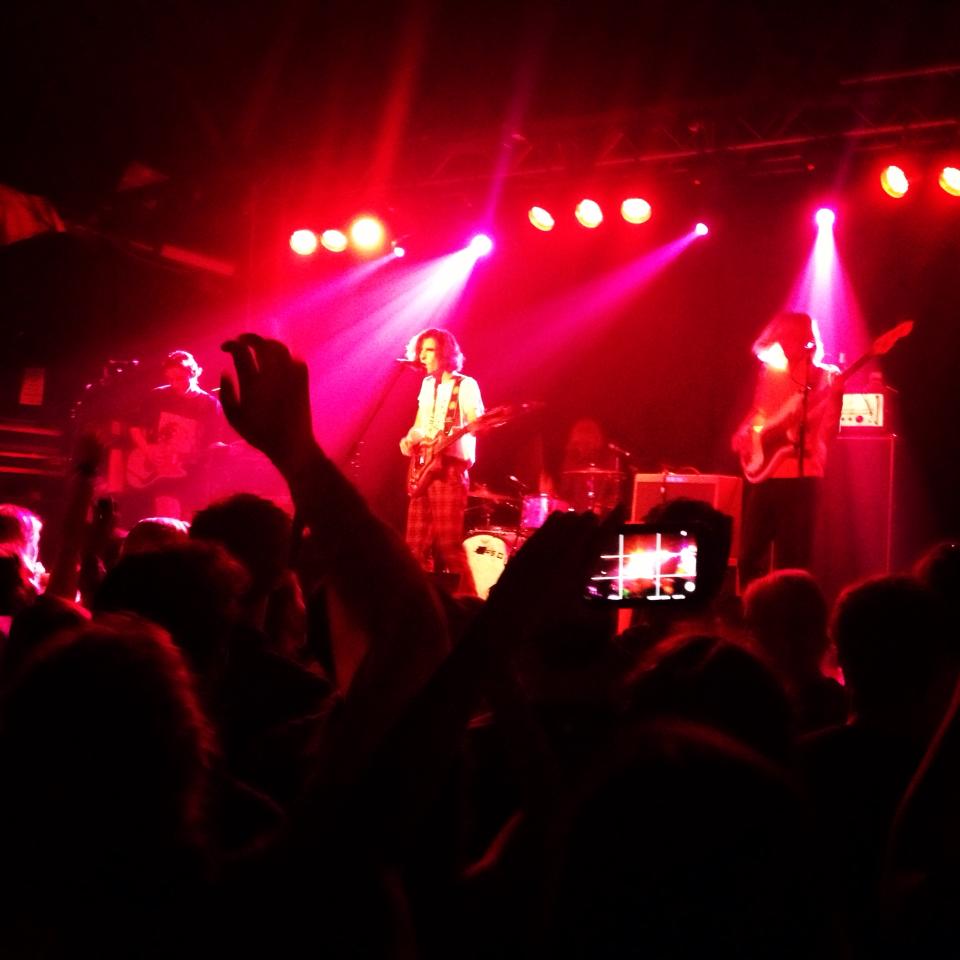 From previous experiences, Oxford crowds are never particularly enthusiastic, but tonight when Swim Deep took to the stage, there were huddles of energy dotted all around the venue.

The gig began with Sundara Karma. Despite nearly every track sounding like something you had heard before, they were pretty funkadelic. The four 17 year olds from Reading oozed sparkle and geed the crowd up for the later, fellow indie-escapism, headliners. The band themselves clearly take great influence from bands such as Peace (track – ‘Waves’, is very similar to ‘1998’) and Childhood (‘Freshbloom’ has a near-identical intro to ‘Blue Velvet’) which isn’t an issue now at their young-impressionable age, but I hope and think, they have the potential to drive away from others and create a grand sound of their own eventually, because to be fair they are really good.

Wolf Alice were up next. With their debut EP soon to be released and some great tracks already unveiled from it, I expected greatness and they delivered. Ellie Rowsell’s lyrics avec her vocals are all the more infectiously-haunting live. Every member of the band had this kind of humble, yet rock star stage presence. Highlights of their set came from new track ‘Blush’ and original Wolf Alice bangers ‘Bros’ and ‘Fluffy’.

Some bands are festival bands and some are not. Now, it’d be a sweeping statement to say that Swim Deep are not, but I must admit when I watched their performance at Reading, having enjoyed their album, I wasn’t totally convinced of their live performance. However, tonight in Oxford they were cracking, making a point that maybe they are just more comfortable headlining their own shows. Being enclosed in a small room, (that wasn’t filled but dedicated fans had huddled close together at the front) you could just feel the love. The b’town lads flowed through tracks from their debut album ‘Where The Heavens Are We?’, starting with the chirpy ‘Francisco’ and ending with emotive ‘King City’.

Tonight’s look for the bands, the techies, and the merch-guy was ‘moody’ – or so I’m guessing – because in general everyone just looked that they would rather be somewhere else. That was excluding honouree Swim Deep keyboardist, James Balmont, who looked to be having fun; wiggling behind his instrument and shaking his shaker. Drummer, Zach Robinson, gave a few flickers of his model-smile and bassist Cavan McCarthey attempted a smirk when a boy shouted ‘Cav you sexy mother f***er!’. Later the band’s techie/mate Mikey Dee tweeted “Tour is taking its toll”, and maybe it just was.

But despite their grumpiness their sound was on point. Perfectly executed riffs and not a drum beat out of pace. A top moment took place when ‘Crush’ leapt from the speakers. The track didn’t quite make the album (it should have done!) but nevertheless is so ridiculously groovy and got practically everyone rocking ‘n’a rolling, apart from maybe a couple of parents. After hearing of other shows on the tour, the much anticipated encore of ‘Tassleman’ didn’t even happen, which was pretty gutting after seeing videos of the both Wolf Alice and Swim Deep on stage, but hey ho.

Overall, the night’s music was fabuloso, but the show went on for too long. Not the performances, but with 3 half an hour breaks between sets it was pretty tedious. This could well be just my growing “old age”, so in fact maybe the bands weren’t having a shit time and instead my granny-like nature just overtook what I was actually seeing. Who knows?