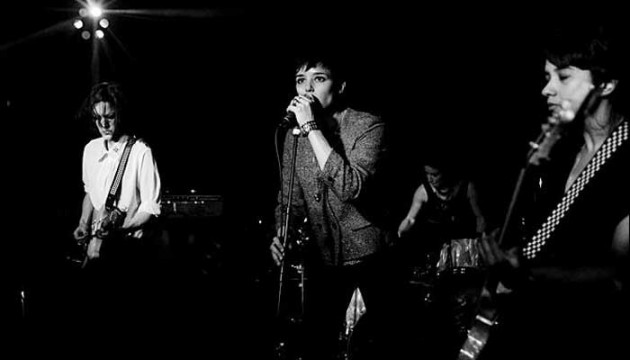 I had a graphic novel of Kurt Cobain’s life when I was a teenager. Oddly, the one page that stuck in my mind wasn’t the depiction of his suicide, but the image of a young Dave Grohl jumping into a fight with recently ex-drummer Dale Crover, with Kurt shouting “This is our new drummer Dave; he’s a fucking metronome!” The reason I mention this is because Fay Milton (Savages drummer) hits hard, blisteringly fast, and with robotic precision. The infamous Jehnny Beth, with her Anglo-French accent rasping insults and her wide eyes piercing the audience before they’ve even played a note, is the allure that dragged most of the crowd to the Arts Centre, but it’s Fay Milton and Ayse Hassan’s rhythm section that made the gig so rapturous.

Bands need a frontman; they need the edge, the sex appeal, the freedom, that spark that sets the band alight, but they also need a solid backbone; because without it, the posturing of the abrasive singer and the enigmatic guitarist would tamely flop into insignificance. Savages have that core, and they have the bravado in abundance, and it’s scarily good when it all comes together. They play most of the material from Silence Yourself (the calmer ‘Marshal Dear’ being the notable exception) in an attempt to do as they record suggests, and throttle the audience. And they don’t half achieve it. Hammering through a punkier set than I expected, there was hardly any faffing around with guitar pedals, and hell of a lot more drum-skin battery. There’s no point mentioning track names, because every single song was intensely good, but needless to say whispers of “Husbands, husbands, husbands…” echoed around the vaulted ceiling long after the band disappeared. There was no encore, as there didn’t really need to be one; Savages arrived, thrashed any doubts out of the critics’ minds, and left riding on the crest of their own wave. It was no holds barred sensory barrage, and awesome in the truest sense of the word.