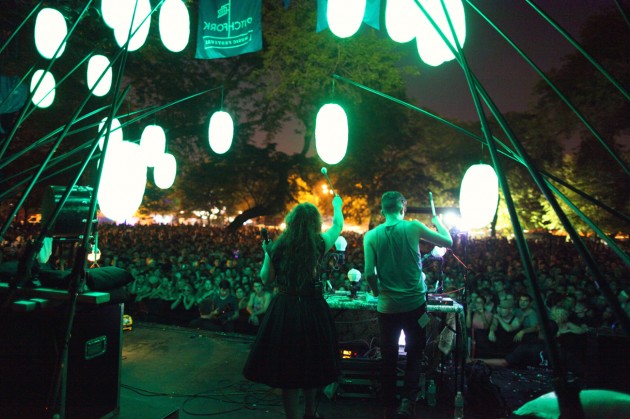 With a dozen glowing paper cocoons and the numerous branches of Corin Roddick’s homemade light-up sampler, Manchester’s Sound Control looked more like a hidden corner of an enchanted forest than a music venue.

Opening with an eerie introduction (compliments of Roddick), the Canadian duo burst onto the stage with ‘Belispeak’, arguably the most energetic of the songs featured on Shrines. After a shaky start from singer Megan James, due to what appeared to be down to some technical difficulties, the duo quickly got their act together and delivered a thrilling performance of the track.

After a lengthy outro to the song, the duo glided into fan-favourite ‘Fineshrine’. Grabbing a drumstick, Megan James began to pound a propped up kick-drum that flashed with every strike.

Next up came the most recent single ‘Lofticries’. It was clear at this point that Purity Ring weren’t going to be wasting any time on audience participation. With lantern in hand, Megan James gave the audience a spooky stare whilst delivering an otherwise flawless vocal performance.

Floating through album tracks ‘Obedear’, ‘Saltkin’ and ‘Cartographist’, Purity Ring conjure up a surreal trance that leaves you wondering when one song ended and when the next started. The soft flashing of the multi-coloured orbs hanging above the duo give the performance an extra leg to stand on. It is refreshing to know that there are still small bands that go the extra mile to provide stunning visuals alongside their music, even to a crowd of 150 people.

It was at this point that Megan James wandered to the front of the stage and began addressing the crowd. Mumbling something about a champagne event and the superb quality sound system the venue had provided, James is nothing short of adorable.

Drifting into the ethereal ‘Crawlersout’, James grabbed the lantern again and delivered another vacant stare alongside her vocals. Whilst all eyes may be on her, I was much more fascinated with what was going on in the background. Whilst Purity Ring may be recognized by Megan James’s sickly sweet vocals, it is Corin Roddick that really runs the show. Switching between his various instruments at an alarming pace, he still makes time to improvise with spectacular delay and looping effects not heard on the album.

After a percussion solo using his homemade branch-sampler-thingamajig, Purity Ring cruised into ‘Ungirthed’, an unearthly upbeat track that had the whole crowd clapping in time with Megan’s kick drum.

Announcing they had reached their final song (thus receiving a few outbursts from the crowd), Roddick briefly stepped off stage whilst James provided a heavenly acapella introduction to ‘Shuck’ to the pin-drop silence of the crowd. Fidgeting offstage, James left Roddick to wrap up the set. After fiddling with what appeared to be a glorified Rubik’s Cube he also shuffled offstage, leaving the crowd with an impalpable fading synthesizer loop.

Purity Ring truly manage to present a live experience that transcends the surrealism of the album, a feat I had assumed almost impossible. With superb visuals and a cracking aural performance, Purity Ring has got the whole package.