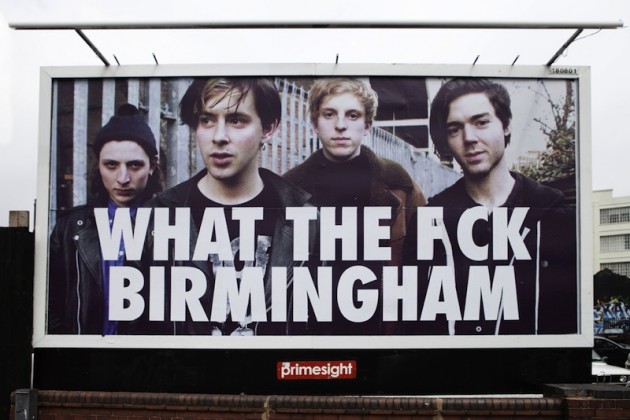 2012 has been a rather hectic year for Harrison and Samuel Koisser, Doug Castle and Dominic Boyce, the four B town lads collectively known as Peace. It has seen them playing an abnormally large amount of shows in a frighteningly short amount of time and rapidly becoming the name on everyone’s lips. Last night marked the end of yet another tour for the guys, and what better way to wrap it up than with what can only be described as a manic, sold out hometown show?

From the very off, madness ensued with fans storming the stage, falling over pedal boards and knocking over microphone stands, crowd surfing and hanging from the rafters. Did the band care? Not at all. Instead, they launched in to a rather short yet impressive set, playing on the vast amounts of enthusiasm shown by the crowd.

It has been 109 days since its live debut at this year’s Latitude Festival, and ‘California Daze’ is still proving a strong favourite with fans with the crowd erupting into a cacophony of noise at the slightest hint that it was about to be performed.

Closer ‘Bloodshake’ led to an outbreak of mayhem, with its math-rock feel causing untold dancing, jumping and general folly.

If this gig showed anything, it is that barriers mean fuck all to band and fans alike. It is evident that Peace love Birmingham, and Birmingham loves them right back.

EP Delicious is now available to purchase on iTunes