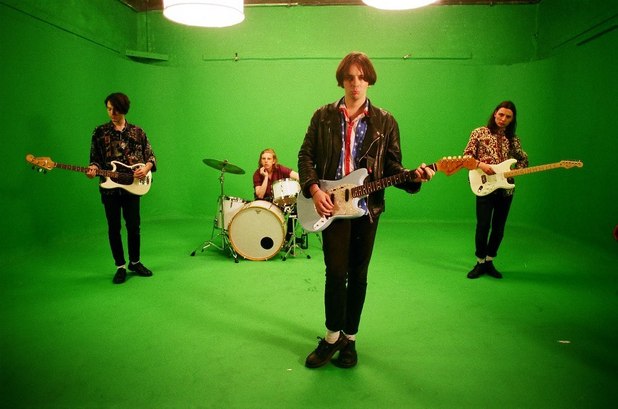 The critics of the Birmingham music scene (or ‘B-Town’ or ‘West Madlands’ or whatever you want to call it) have suggested that the bands involved are nothing but derivative and wondered whether, when all is said and done, the real reason the scene is heralded as a new era for guitar music is just because the rest of Britain’s cities are infertile. Tell that to the hundreds of kids crammed into Birmingham’s O2 Academy to celebrate thee homecoming of two of the cities brightest bands.

Jaws kick things off in suitably breezy fashion. Frontman Connor Schofield’s vocals may be a tad hit-and-miss, but their infectious sun-kissed pop more than makes up for it. The room is rammed despite the headliners not being on for another hour which just shows the pull that Birmingham bands currently have. ‘Toucan Surf’ is a brilliant highlight with its synth-laden guitar chimes and summer vibes. Things are only just getting started, though.

You only have to take a quick scan of the room to realise who people are here to see. Peace signs are emblazoned on pretty much every girl’s chest, along with leopard print and Koisser-inspired haircuts. The band take to the stage in low-key fashion. Frontman Harrison Koisser briefly waves at the crowd before launching into the raucous ‘Delicious’. ‘Follow Baby’ follows and sets a night-long precedent of bodies flying over each other and liquids (both cold and warm) being thrown.

“I don’t wanna go to school” Koisser sings to his adoring public on ‘Lovesick’, before sighing that he just wants to “get lovesick with you”. Romantic stuff from the young dreamer. His brother Sam acts as a brilliant counterbalance to the singer as their guitars jangle along together nicely. It’s only been ten minutes and bassist Douglas Castle is already drenched in sweat and necking Evian before Koisser slows things down with the beautiful lament of ‘Float Forever’.

“Who bought our debut album?” he asks cheekily, before being inundated with a resounding ‘yes’. ‘Higher Than The Sun’, the album opener, follows and sounds like it is made for stadiums despite the venue’s modest size. A rare outing of b-side ‘Scumbag’ is the highlight of the night with the song displaying what quality musicians the band (especially drummer Dom Boyce) are.

“This one’s for you Birmingham you legends” Koisser tells the crowd before explaining that there is no place like home. “This is where we wrote all the songs and met all the girls” he laments, before the band explode into the swaggering ‘Wraith’. The tune gets the biggest reception of the night and triggers enormous movement in the crowd. A mosh-pit ensues but the song reaches its climax without any injury.

“This is a particularly long one” Koisser says before embarking on a sprawling ten-minute version of Binary Finary’s ‘1998’. The band only leave the stage briefly but the deafening shouts of “we want more!” urge them back on to round off proceedings. “I wrote this outside the Bullring” the singer laments before a gorgeous rendition of the band’s best song ‘California Daze’. “Go and watch the pretty girls in town when you’re feeling kinda down” he sings but his voice is barely audible. A quick chorus of ‘Ain’t No Mountain High Enough’ ensues before the psychedelic Foalsian stomp of ‘Bloodshake’ winds things down. “You vibe so hard” is the band’s final message to a crowd who, in Koisser’s words, “made it all possible”. Long live Birmingham.

“What a hangover” Koisser enthuses as he takes to the stage at Coventry’s Kasbah the following night. It may only be a stone’s throw from where the madness happened last night, but there is no relenting for the band’s faithful fans. “We’ve come from Birmingham to see this” many members of the crowd admit, and sure enough, there are familiar faces from the show the previous night.

“Thanks for coming out to see us” the frontman tells them “…and it’s a Sunday as well”. It may be a Sunday, but this is no day of rest for Peace. It is business as usual as they tear through the psychedelic ‘Delicious’ and the anthemic ‘Follow Baby’. Birmingham may be where the band’s heart is, but the crowd look intent on matching their rivals from up the road as they move and shake to a familiar set-list.

‘Waste of Paint’ displays what talent Dom Boyce has and, the longer the night wears on, it becomes clear the drummer is the core at the heart of Peace’s sound. “All I gotta do, all I gotta do is forget you” Koisser sings on ‘Toxic’ in a rare moment of youth fallibility. After that, it’s back to the themes which make Peace resonate with their young fans: hopefulness, lust, love, romance and elation. ‘Wraith’ sparks a huge crowd dance-along with Koisser nearly being hit by a stray Converse shoe.

“Who’s jacket is this?” he asks the crowd before picking up a tight denim jacket and wearing it for the rest of the night. ‘1998’ proves a set highlight once more with the band leaving the stage one-by-one and shows that great musicianship doesn’t always have to be avant-garde. An atmospheric ‘California Daze’ gives the crowd precious resting time (when they aren’t holding lighters aloft) before a raucously loud rendition of ‘Bloodshake’. The crowd disperse and pause for photos with Jaws on the way to the exit, whilst many stay behind in the hope of a glimpse of their Birmingham heroes. Derivative? Perhaps. In love? Certainly.