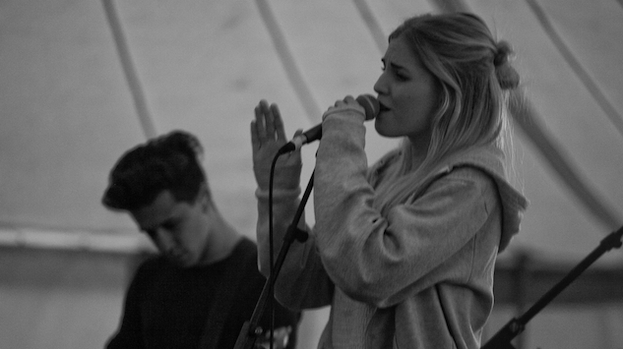 London Grammar, the three piece band consisting of vocalist Hannah Reid, guitarist Dan Rothman and Dot Major on keyboard and drums, caught my attention with the track ‘Wasting My Young Years’. The band released their debut EP Metal and Dust in February but have recently gained momentum recently. With their appearance on the Disclosure track Help Me Lose My Mind released in June probably aiding this. The hype around a new band can be justified when you see the reaction of the audience and London Grammar inspired various random people to come to me and proclaim their love for the new band. The band face comparisons to Florence and the Machine and The xx; some even saying Hannah Reid was a better less screechy version of Florence Welch.

Although the band are indeed similar to The xx with the intense melodramatic and slightly morbid style, they do not have the contrasting vocals of Romy and Oliver; the focus is singularly on Hannah’s voice. Live her voice is virtually flawless and managed to keep the crowd captivated. They’re a very much understated act live with the focus on the music rather than the stage presence which results in a very stationary crowd. For a Saturday night it is understandable why some could find the lack of movement boring though in fact this was not the case with most of the crowd leaving impressed. Lead singer Hannah spent most of the looming awestruck at the large crowd proclaiming ‘it was the best crowd they’ve ever had’ and credit to her even managed to keep the intensity dealing with a slipping mic. Safe to say she’s probably going to get used to crowds like this and probably ones much much larger.