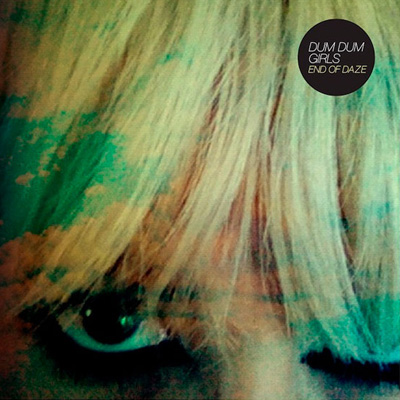 Dum Dum Girls seem to have been knocking round for years making that type of reverb-heavy noise pop, but here on End Of Daze EP they seem to be in the process of slowly turning down the guitar volume, and pushing the singing further forward. There’s been a clear trajectory that creative mastermind Dee Dee Penny’s voice has taken from their first single ‘Longhair’, where she was barely audible, through the two confidence enhancing LPs of 2010 and 2011 to this new release where the lyrics really are central to the finished product. Of course, this maturity arrives because of a particularly tender moment in Dee Dee’s personal life: the death of her mother (who was featured on the sleeve for DDG’s debut I Will Be) is a subject that drives this album.

Naturally the pervading mood is a nihilistic sense of loss and despondency, particularly evident on the morbid refrain of “I’ll dream a death” on opener ‘Mine Tonight’. ‘I Got Nothing’ really captures that sensation of a perpetual pillar being removed: Dee Dee’s heartfelt repetition of the chorus “I feel nothing” exemplifies an exhaustion of emotion, reinforced by a small guitar riff that immerses itself in appropriately quivering tremolo. The cover of eighties new wave Strawberry Switchblade’s ‘Trees and Flowers’ sustains the pensive, remorseful temper perfectly – DDG’s drum-less rendition glides even better than the original on a surfeit of affect-laden guitar chords and poignant sentiment. Slow-burning single ‘Lord Knows’ trembles along next, inspiring Dee Dee’s voice to heights previously unheard of on a Dum Dum Girls record: she imbues her singing with a soaring steeliness, though always pleasantly tinged with grief. The final number ‘Season in Hell’ is comparatively bouncy, chugging along with the hope that there is “something new to be dreamed”. The catharsis is completed by the punning final line “it’s the end of daze”, as Dee Dee is shaken from the daze of grief.

There is a softly concealed resolve stamped through End Of Daze like Brighton rock, propelling the band forward beyond the frivolities of their lo-fi Brooklyn contemporaries. They show an admirable confidence in the quality of their lyrics and voice by pushing them ahead of the growling whirl of guitars and reveal a willingness to grow away from American reverb indie garage masters Black Tambourine. We can only hope Dum Dum Girls hang around for longer than they did.

End Of Daze EP came out in September on Sub Pop.