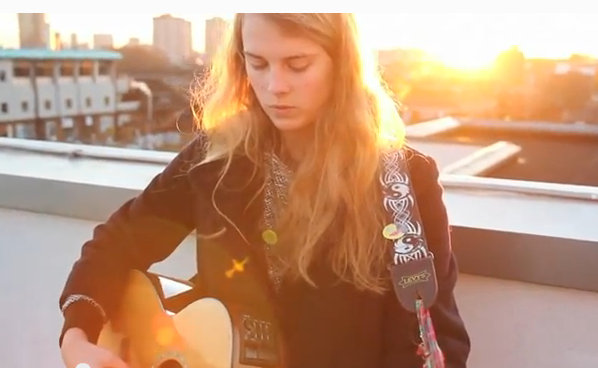 Marika Hackman’s been quietly getting on with her music for a while, with little fuss and some lovely support slots (Benjamin Francis Leftwich last year). This year sees her release her mini album, a seven track shuffle towards the world of LPs.

Marika’s voice is delicate, precise and beautiful, her lyrics and melodies giving her songs a darker edge. In the case of ‘Cannibal’, if you were to listen without watching the video and without paying much attention to the words, you may hear quite a different song to the picture the lyrics paint. While the soft arch of Marika’s vocal range produce a mellow tune, the lyrics tell a more violent story: “have you seen my nose, I cut it off last night. Let’s just hope it grows, I’d hate to look a fright”. We also learn the meaning of the mini album’s title. That Iron Taste is blood running down a face. Pretty imagery.

The video itself focuses on a particular lyric (and not the nose hacking off one): “everybody knows gluttony’s a sin”. With this in mind we worry slightly about the people Hackman sits calmly watching stuff burgers, jelly and blocks of butter into their faces. And we aren’t entirely wrong to do so. The church setting gives the whole affair a confessional tone. Marika reacts to the gluttony at the video’s somewhat sudden conclusion. We’ll let you find that out yourselves though.

That Iron Taste is out February 25th via Dirty Hit. Until then check out the free covers EP available on her website, or catch Marika on tour with Ethan Johns, or at her headline dates later this month and early March. Watch ‘Cannibal’ below.