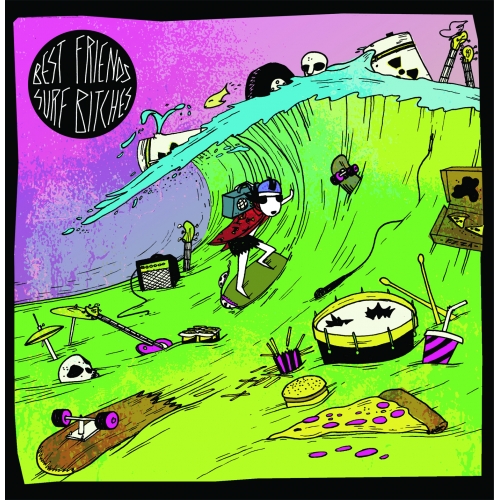 It’s always a risky move, pulling your inspiration from a scene focused thousands of miles away on the West Coast, but somehow Sheffield-born foursome Best Friends use that familiar surf-punk sound combined with that all-too British sentiment “take me from the pouring rain, ‘cause I’ve got sunshine on my brain” and seem genuine. As they put it in their new single, Surf Bitches, “Rock-a-way Beach is just a state of mind” and the sanguine backing vocals ooze of that easy-going disposition. The track is no more ground-breaking than anything being put out by the rest of their garage counterparts, including Art Is Hard Records label-mates SPLASHH, but it is maybe this that gives it a comfortable familiarity that is perfect for feel-good beach music and the sort of longing-for-summer tune whose release is perfectly timed for the end of summer, September 17th.

So far, Best Friends have appeared with the likes of fellow faux-American band Summer Camp, as well as Django Django and Weird Dreams, and now kick off their Surf Bitches tour across the UK, starting on September 8th. Impressively, they boast two hometown shows, despite only having been around for a little over a year. With the recent successes of their EP Throwing Up and split-tape with Grazes, Mankind (both of which have sold out), these small gigs are bound to be ram-out. This is the chilled-out youth and no one’s getting tired of them yet.