Now that we’re four episodes in to this series of Later… With Jools Holland, I thought I might share with you my process of preparing for these articles. Generally I sit down in my dad’s study at 9 o’clock and I look up who will be playing on tonight’s show. After a quick search to get myself acquainted with acts I’m not familiar with, I comb my iTunes to listen to some of my favourite work by the bigger names on the bill. Prior to the first episode I listened to ‘Devil In a New Dress’ by Kanye West; last week I sped through half of Franz Ferdinand’s self-titled LP. This week? This week I banged my head against the wall for half an hour.

Full disclosure: I do not like Jake Bugg or Manic Street Preachers. Not in the slightest. I’ve never been able to tolerate Nicky Wire’s half-baked opinions that are heralded by some (coughNMEcough) as sacrosanct. I simply can’t excuse the fact that Preachers haven’t put out a good record for close to 10 years. I certainly cannot accept that if someone created a musical Frankenstein’s monster to fill the void left by Oasis, it would look something awfully similar to Jake Bugg.

Anyway, I hold no grudges against the rest of the lineup which includes Poliça, VV Brown, Cecile McLorin Salvant and Kacey Musgroves. So let’s get this over and done with shall we.

Manic Street Preachers are starting us off tonight with ‘Show Me The Wonder’. It’s a laboured attempt to try and make a more chilled out and ‘mature’ sound, presumably because they’re getting old and that’s what a band should do when they’re old. Right? Well this rebirth means a lot of poorly constructed horn arrangements, singing out of tune, and a song that sounds like it was made for the closing credits of an awful multi-camera sitcom.

We now enter the second circle of hell as Jake Bugg tries to rock our socks off ‘What Doesn’t Kill You’. It’s clear from the electric guitar and the customary leather jacket that Jake’s trying to take a slightly rockier approach to his second LP. With his debut not even a year old, the change in direction is a clever move to create a clear difference in his new output. Despite this, the same problems arise. Maybe I’ve lived in and around London for too long but I simply can’t come to terms with Jake’s odd delivery and pronunciations. I’m pretty sure no one from Nottingham pronounces ‘doesn’t’, ‘doooooosn’t’.

Here comes VV Brown with ‘The Apple’. Before we get to the music, I have to mention that VV and her band look like they’re from an 80’s sci-fi movie about what 2013 will look like. Especially the backing singer sporting the peroxide hair and majestic turtleneck. That being said, this was the first success of the show. It’s a masterfully produced pop record, with some interesting techno influences.

Ah so, not only are Manic Street Preachers presumably performing twice, but now we also have to sit through them talking through German grammar with Jools. Give me strength.

Now. There haven’t been many times in my life where I’ve been left speechless. But watching Cécile McLorin Salvant perform ‘Nobody’ was one of those times. Here’s a picture of my face during her performance. 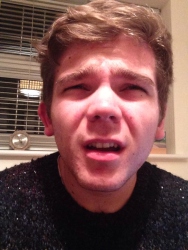 Make of that what you will.

In what I can only call divine intervention, Poliça come to save me from the horrible malaise I’ve spent most of this episode in. Their 2012 debut LP Give You The Ghost was laced with real quality, and this performance of ‘Chain My Name’ shows that in abundance. The combinations of Channy Leaneagh’s ethereal vocals and one hell of a bass line make Poliça the undisputed winner of the evening.

Up next is country sweetheart Kacey Musgraves with ‘Merry Go Round’. Jools informs that in the country obsessed US, Kacey has already bagged herself a number 2 with this single. And I can see why. It’s nice and America will always go mad for a woman that can play guitar. My problem is that the performance is just that. It’s just too nice and too sweet for my palate.

As Jake Bugg races through ‘Slumville Sunrise’ I thought of the reasons why he repulses me. The reasons are threefold:
1) the accent and phrasing issues I alluded to earlier
2) the fact he has been rammed down my throat by Radio 1 as some sort of saviour of ‘dying’ guitar music
3) it’s all very paint by numbers.

‘Slumville Sunrise’ feels like a song drawn up by an A&R man for the 18-30 year-old male demographic. It’s derivative, it’s stale, it’s (now this is genuinely the most damning thing I’ve ever said about anyone) all a bit Fratellis.

Manic Street Preachers are back, and in a moment of real lucidity, they’re performing ‘Anthem For A Lost Cause’. All I’m going to say is watch this clip and tell me that Nicky Wire doesn’t look like a pastiche of a washed up rock star. TELL ME.

I’m sure some of you will think I came into this with a determination to hate this episode of Later… You’re probably right, but ask yourself if either Manic Street Preachers or Jake Bugg actually did anything to dissuade my pre-conceptions? This is the kind of episode of Later… that facilitates my love-hate relationship with the show. The brief moments of brilliance, provided by VV Brown and Poliça, were marginalised while we all reveled in abject mediocrity.

Catch Later… With Jools Holland Tuesdays at 10pm on BBC2.