After a successful first year, Oxford festival goers geared up for round two of Gathering Festival. The event takes place across various venues situated around Oxford’s Cowley Road area. The idea is that gigs are constantly happening and that you use your time wisely running from venue to venue. It’s basically Oxford’s answer to Dot To Dot festival. This year the festival grew; now made up of 7 venues and 43 acts. Obviously there was going to be clashes, so the day before I sat down and highlighted all I was going to see, and it was inevitable this plan would change.

The first act I went to see was JJ Rosa in the East Oxford Community Centre. Relatively unknown, but with a massive sound, her quirky, strong voice rippled through the venue with the help of her edgy electric guitar. Later covering Jimi Hendrix and ‘Last Night A DJ Saved My Life’, she seemed a favourite of the over 35s. Although that’s not to say the younger crowd weren’t getting their groove on as well.

After this I decided to go and suss out the other venues and whilst doing so I stumbled across Pawws opening The Bullingdon. Now Pawws was very good, her high-pitched vocal with soft techno is relaxing, but I personally I think it gets to a point where it all just sounds the same. With this in mind, I left The Bullingdon and headed over to the tiny Truck Store to catch Fyfe’s set.

It was then, that it became apparent that some venues where going to fill very quickly. Unable to get in with the capacity full, I opted to go and see PYYRAMIDS, in which I managed to get inside the venue, but not into the actual stage room. So, instead I decided to hang around inside just listening and clearly not being able to see. Their music seemed to be a lot heavier live than it is on record. This was great, considering that most of the early bands had quite chilled sounds (excluding JJ Rosa) it refreshingly seemed to wake everyone up. An electro beat with deep vocals created by the two piece, made for a heavy, pop-dance session.

Next up was Jake Hart back at The Bullingdon, a musician with a kind of acoustic, hazy synth infused sound. Enjoyable, but it took a while to get going. After this I decided to go and top up the energy levels and brought a load of food, which to my frustration was then emptied into a bin in O2 Academy by a security guard who tried to apologise and console me as I cried whilst my Wotsits and Haribo tumbled in. Fortunately, Findlay’s set cheered me up instead. Her distinct blues vocal and stage presence seemed to have stunned many around me who were just completely captivated by her performance. With her raucous sound and snarling attitude, she’s exactly the kind of musician you watch and just want to be. Honestly I would go as far to Findlay was the best act of the day.

The moment that Findlay’s set finished I rushed upstairs to O2 Academy 2, to catch 18 year-old Chloe Howl’s show. On the verge of breaking, I was eager to experience Howl’s honest-pop live. She seems to be one of the lucky few musicians at the moment, gradually managing to conquer both the mainstream and the indie sides of the industry. Despite her music being about being a teen, and therefore most her fans being teens, I was surprised to see that there were more adults than youths about during her performance. Her upfront lyrics, over tinged electro, pop beats evoked lots of dance, and with two girls in front echoing her body ripples and copying her hand gestures during ‘No Strings’. Chloe Howl is definitely one to keep an eye and to clearly if you get the chance catch her live.

Annoyingly, the capacity was full for London Grammar. Later on I heard groups talking of how amazing their set was; I didn’t really expect it to be anything else. On the other hand, I couldn’t complain as after one look at the queue I headed upstairs and into Jay Brown’s set. A musician I had never heard, but am happy to say is very talented; a strong voice with a groovy stage presence. A little bit of fresh air.

You always get those couples at gigs that have a few of drinks and decide to get very ‘PDA’ with it. Unfortunately, for all of Local Natives this is practically all I could see. Despite this, their set was completely beguiling. Playing a mix of both Gorilla Manor and Hummingbird, their set was full on and flowed quickly and cleanly through each song. Clearly everyone watching was a fan, or was going to be one song in. Their echoing melodies and compacted instrumental sound was impressive and so enticing, I literally couldn’t move my eyes from what I could see of the stage.

Temples are probably my favourite band about at the moment, and after seeing their set at Reading Festival this year, I was keen to experience it again. For starters, the whole band are just very pretty and nice to look at. Secondly, their music is on a par with their fabulous style. Their music influenced by early 70’s psychedelia, has its eerie and trippy melodies accompanied by sparkly guitar licks and glittery drum beats. Not as sun-kissed as Tame Impala’s Aussie neo-psychedlia, but more bleak and openly British. Their set goes down a treat, spinning the audience into a heavenly euphoric atmosphere. Plus, James Bagshaw just oozes swag. 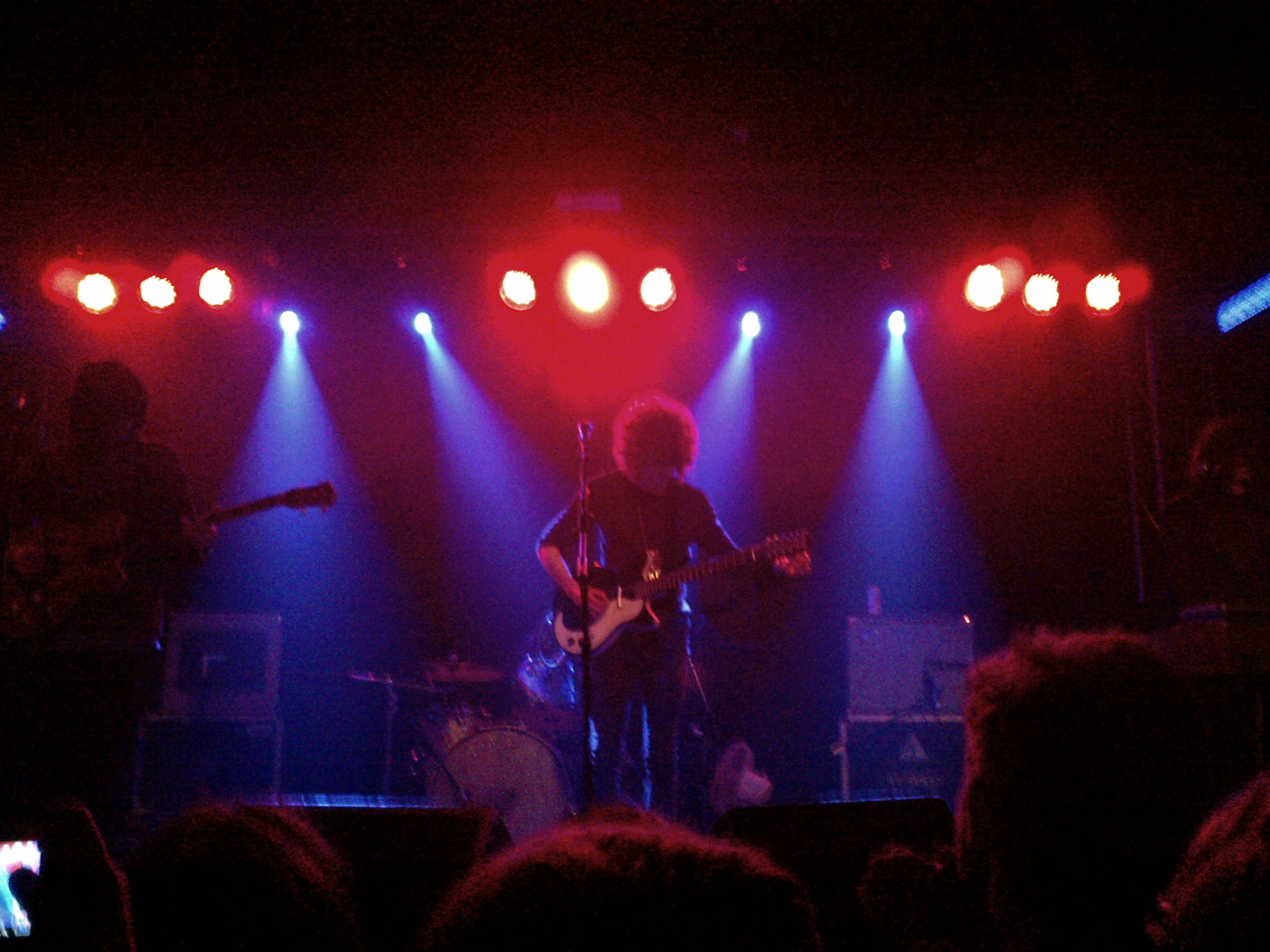 Lingering by the door waiting for the end of Temples set, I leapt out the building and onto the street heading once again to The Bullingdon. I was aware that by ten the venue became 18+, but as it was Drenge I was desperate to get in. At first I tried to sneak in, but the guard said ‘ID’ so I opted for waving my press wristband and shouting ‘I’m Press, let me in’ to which he replied ‘I don’t care who you are love, you’re not coming in without ID’. So while I and group of fellow pre-18 year olds stood outside distributing mature evils to the guards, I opted to go and get my dinner instead.

After a great Cowley Road curry, I returned to the East Oxford Community Centre ready to watch one of DYC’s favourites, Wolf Alice. Now quite an established act, the venue was packed out and the body heat was monstrous. Their set was, as always was enchanting but in a community centre felt a little more rough and ragged. Closer to the audience, the band-crowd interaction felt better than most “music venues”. Smiling faces throughout the room and grins on stage was all to be seen. Being past twelve everyone seemed to have just gone past the point of being at all critical of any bands and were throwing any energy left into Wolf Alice’s set. Plucky guitars and chirpy ‘aahs’ are the sum of the band’s show. Impressive and chilled as usual.

It felt ridiculous the fact that we weren’t allowed into The Bullingdon after ten (I’m guessing because it was a pub), but were allowed to sit in the bar inside the East Oxford Community Centre at one in the morning. At 1:20am, the final band of the festival, in the form of Charlie Boyer and The Voyeurs took to the EOCC stage. Heading towards two in the morning, they had possibly the worst set time; not many people were still standing, so the band had about 50 people (tops) watching. Temples and Tom Dougall from Toy came out in support for their fellow Heavenly Recordings artists, and it was fair to say the drummer from Temples was thoroughly enjoying the set. Their scratchy guitar riffs and classy style was compacted onto the tiny stage, as the five squeezed on, not allowing much movement. Now, this may be down to them being recording artists, rather than live performers, or it could be that it was the early hours of the morning, but their sound wasn’t as clean-cut as it sounds on their records. Perhaps if there had been more people and the sound technician hadn’t of practically dozed off, a little more effort would of aided their set.

Overall, I have to say (not being a feminist, just speaking the truth) it was the female fronted bands and artists that shone the most on the day. Acts including JJ Rosa, Jay Brown, Findlay and Chloe Howl were among them. I genuinely feel that something is really happening in the music industry for female musicians at the moment, and Gathering proved this.