In my preview of Festival No. 6 last week I described the location as probably the most beautiful in Britain. Now I can confirm that. It bases itself around Portmeirion, a small village designed by maverick/visionary architect Sir Clough William-Ellis in the 1920s to invoke a Mediterranean ambiance in the middle of rural north Wales. It perches on the side of a cliff with houses, piazzas and roadways hewn from the craggy rock. Portmeirion feels like it’s been sprinkled with fairy dust, a perfect location for some fantasy family drama (the cult spy and mystery subterfuge 1960s drama The Prisoner was indeed filmed here), multi-coloured and peaceful.

It was in those mystical surroundings that I saw Temples on Friday night. Their effervescent strands of pop psychedelia may not have fitted quite so snugly amidst the downpour ardently falling outside the small tent they played in, but they nonetheless proved themselves a stoic bunch. ‘Colours To Life’ and ‘Shelter Song’ were given a popular run-out as Kettering’s Temples put some weight behind the high levels of blogosphere attention they have become in the habit of receiving this summer. Their appearance on The Estuary Stage, which sat optimistically behind an azure-blue swimming pool, was succeeded by Liverpudlians Clinic.

On their records Clinic are exquisite purveyors of hypnotic drone psyche, blissing out on dense production and entrancing repetition. But in a live setting they blitzed and burned a loyal following with rockier flicks and twists. Clinic can be an intimidating presence for the uninitiated: in order to preserve the thematic integrity of their band name the foursome don medical outfits – scrubs, face-mask and all. Seeing nothing but the wild eyes of a thickset bassist pounding away on his instrument is a little disconcerting at first. Their set sat perfectly around dusk-time, as did Jagwar Ma’s show. The latter shrouded themselves in low lighting and flushed The i Stage tent with woozy strobes to compliment the rave-easy languid sound they proffered to a passionate crowd. When at full capacity that stage had a strange intimacy, a positive claustrophobia that leant itself to a close quarter jiving band like Ma.

Jagwar Ma have been likened by all and sundry to The Stone Roses and the age demographic was reflection of those similarities. Indeed Fest No. 6 seems to target the generation now in their 30s and 40s. They have the marketable duality of being both blessed with the requisite amount of expendable income to afford tickets and the keenness and enthusiasm to attend. Five out of the six headlining artists from last year and this – New Order, Spiritualized, Primal Scream, My Bloody Valentine, Manic Street Preachers – straddle the period the 80s and 80s, just when the core target market were reveling the bloom of their youth. This is in no way a criticism though. Their enjoy-it-at-all-costs hark back to youth furnished the campsites with a social vibrancy, an affability and openness to any and all. This fluidity of integration is not always present in festivals like Reading that are directed at a younger market: they have a tendency to divide more visibly along social clique lines.

Friday evening was headed by the electronic dub-soul of Portmeirion’s youngest headliner James Blake. Fresh from a Mercury Prize nomination for 2013 album Overgrown, Blake rolled on stage to a less than full crowd. The songs were all present but there was something missing, some quality that seemed elusive on a big stage. The subtle vocal intricacies and emotional tenderness that seeps through Overgrown was subsumed and swallowed up by the overwhelming ocean of bass that he or his sound engineers deemed necessary to fill such a large tent. It felt like a vain attempt to over-popularise Blake’s music, to transform him into something dancier. In truth he would have been ideal on a much lower key stage, closer to the audience, but the demand was there and he was given a chance, not undeservedly considering the success of Overgrown, to take the top spot at a festival. It’s a shame but all was redeemed by Saturday night’s main attraction. 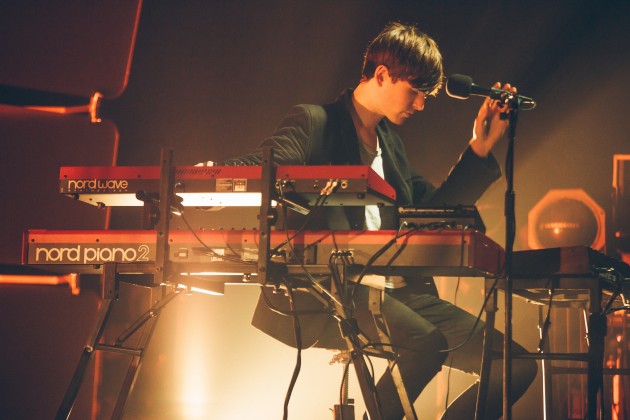 In layman’s vernacular, My Bloody Valentine are the shit. Still. Even after twenty years. From 21:30 to about half ten on the middle evening, MBV ripped and tore everyone’s ears off (particularly those located front and centre) with another aural onslaught. It’s difficult to isolate any particular song or moment as a highlight because every single one was executed with the requisite carnal brutality of the noise. Didn’t matter from which era they drew the set-list from – which included older EP favourites ‘Cigarette In Your Bed’ and ‘Honey Power’, Loveless hits ‘Only Shallow’, ‘Soon’ and four tracks from the newest album MBV ‘Only Tomorrow’, ‘Who Sees You’, ‘New You’ and the unique jet-engines of ‘Wonder 2’ – each was sublime and off-kilter. Kevin Shields and co may be getting on a wee bit but that doesn’t seem to be diminishing their live performances. Or the volume – the 15 minute set-closing white noise leviathan ‘You Made Realise’ was as wrathful and potent as ever. The year of intensive touring appears to have sharpened and fine-adjusted the still phenomenal show they played in Hammersmith in March of this year. The sheer power may have been overpowering for listeners new to the band and it certainly helped to have a detailed knowledge of the tunes but, according to my sources, from further away even outside the big tent the melodies were as clear and limpid as they are on record.

Elsewhere on a surprisingly sunny Saturday afternoon another Liverpudlian group entertained the Estuary Stage. Heavenly Records’ Stealing Sheep found a small brass and percussive band to go with their Warpaint-like female harmonies and sanguine love songs. Leeds formed Hookworms were unfortunate cancellations with one of their group stuck in an operating theatre. Daughter amped up the bowed guitar and the mellifluous Lianne La Havas engaged her crowd with some surprisingly warm audience participation tasks and joyful demeanour.

Those two acts sandwiched a curiously damp set from Bristolian hip-hop legend Tricky. I did signpost him in the preview, in the hope/expectation that he would bamboozle the people with a devilishly suave batch of low-thrum grooves and indefatigable charisma. But instead we were subjected to about four or five elongated rock jams, one of which was Motorhead’s ‘Ace of Spades’. If the concept behind that cover choice for Tricky was to shock then it was a glorious success. In a desperate attempt to whip up an atmosphere, he encouraged stage invaders despite warnings not to do so but response was lame and insignificant. Output was rockier and more guitar-focussed than expected but Tricky, in lieu of any instrumentation to distract him, flailed wildly from side-to-side. He may have written and produced everything he has released but he seemed oddly superfluous in his band, achieving nothing more noteworthy than intoning the odd lyric. Perhaps his slot was just too early and too short.

Sunday morning was very wet and very fucking windy. So blustery in fact that the gale blew my fly-shield half off and the precious tent innards got soaked. Fortunately this was Festival No 6, with a site that boasts luxuries rarely afforded at festivals. In response to the downpour one could repair to the cosy hotel lobbies and drawing rooms, each with working reclining armchairs and working radiators – even a bar that didn’t sell pints of San Miguel for £4.60. Divine. And then to the thick sheltered canopy of the forest, with its pop-up DJ booths and quasi-magical dog cemeteries, wishing trees and hidden hammocks. There was also a stage in the woods decorated with gaudy blankets and hanging draperies. It featured ukulele folk bands and sensitive singer-songwriter types, clichéd perhaps, yet there is something enchanting about watching that genre-style being performed under the swaying trees.

The discontented weather took more important casualties that my tent: it forced the closure of The Estuary Stage and so denied an opportunity to see Charlie Boyer and the Voyeurs as well as Wire. A shame, but always a risk when staging an autumnal arts festival in north western Wales. These New Puritans were still around to play the i Stage though. A live band of seven took to the stage and knocked out captivating versions of tracks both old and new: ‘Attack Music’ and ‘We Want War’ along with ‘Fragment Two’ and ‘Organ Eternal’. The brass section was accomplished and the staggeringly beautiful Portuguese singer Elisa Rodrigues, a mesmerising presence at the front; the cuts from brilliant new album Field Of Reeds were fully realised in all their sonic splendour.

Johnny Marr repatriated a couple of Smiths songs before Chic and Nile Rodgers made their magisterial entrance. ‘Freak Out’, ‘We Are Family’ and ‘Let’s Dance’ were all delivered par excellence, as the whole main tent jived to the disco riffs. 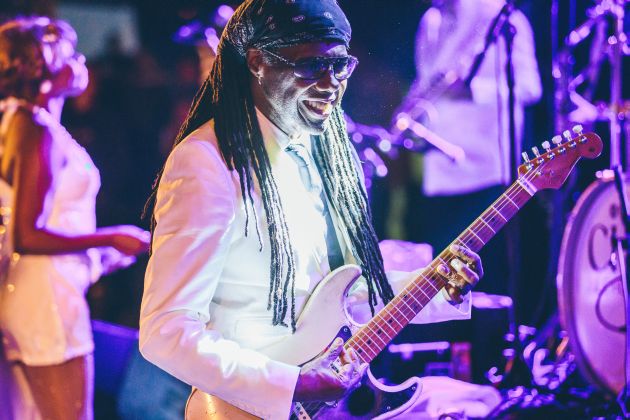 That left a decision for the evening: stand for a hour surrounded by Welsh people for the Maaaanics, or head to the cinema theatre in the village for Shane Meadows’ Made of Stone Stone Roses documentary. Because I was there at the behest of a music website I faithfully opted for the former. Manic Street Preachers are a strange band. Debilitated quite early on their career by the disappearance of enigmatic lyricist Richey Edwards, James Dean Bradfield and outspoken Nicky Wire have successfully sustained a project that could have died long ago. It’s an achievement that has to be respected. My issue is that they are a proper rock’n’roll band with the same tired rock moves and poses from the 70s. And their sound rarely progresses beyond that template. There were times when the set was dull – particularly the new songs (from the new album that came out a day after their festival appearance) and Bradfield’s acoustic number (one of which was accompanied by Richard Hawley) – but they always managed to grab the audience’s flagging attention with one of the hits, and there’s no doubt that the Manics have written some great songs – ‘Motorcycle Emptiness’, ‘If You Tolerate This’ and ‘Design For Life’ were all sprinkled at regular intervals – and they were played with the high level of musicianship one would expect.

There are very few criticisms that I can lay at the feet of Fest No. 6 – nothing they can do about the weather after all. It’s a great way to celebrate the end of the festival season, with a strong band-list (as it was last year) and genial ambiance. It offers warm indoors and a refreshingly solitary beach for when the crowds become too much, although wandering around that beautiful little village never got tiring. There’s no doubt I’m biased because they’re my favourite band but MBV were the highlight, mercifully undimmed by age; Chic’s crowd frenzy was the catalyst for the most memorable atmosphere, and These New Puritans managed to release one of my favourite albums of 2013. Of course the multiple cancellations were disappointing but always accompanied by understandable provisos. Besides they left no indelible mark in the overall perception of the weekend. 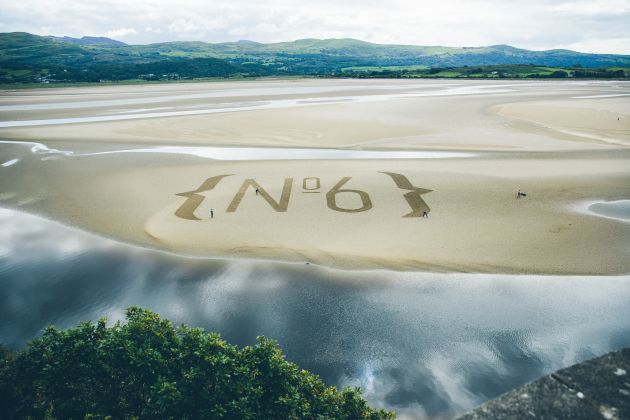 Tagged with → Festival No 6