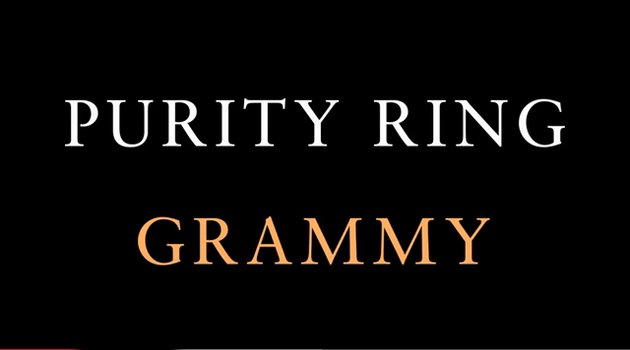 Canadian duo Purity Ring are back, and this time they’ve decided that they’re only going to go and be bloody rap artists.

Bar the release of ‘Belispeak II’ with Danny Brown in October, it seems Purity Ring have held back on revealing anything new for their avid fans to feast their ears on. Whilst it wasn’t what the fans were hoping for perhaps, the collaboration with Brown gave the fans a chance to get their heads around the concept of the duos cut-up electronic sounds alongside a rap vocal counterpart. Regrettably, we described the collaboration as “A blip we would rather not see repeated anytime soon” – it seems we shot ourselves in the foot a bit there. Purity Ring’s cover of ‘Grammy’, a track originally performed by rapper Soulja Boy, is sublime.

Fading in with sharp keys and familiar pitch alternations provided by singer Megan James and re-edited by Corin Roddick, the track quickly grows into three minutes of incredible juxtaposition. It’s difficult to put a finger on the most impressive aspect of the track, be it Megan James’s sickly-sweet vocals and her ability to deliver them at such a high pace, or possibly the incredible cohesion between the flawless production of the Purity Ring-esque sounds with their vocal accomplices. Producer Corin Roddick, the second half of the pair and a self-proclaimed novice to the producing game, recently told FaceCulture that “I feel like everything I make is sounding better than the last thing I made”, and this statement certainly holds true in with respect to this latest release.

On paper, everything about a combination of Purity Ring and Soulja Boy shouldn’t work – the Purity Ring die-hard fans would wash their hands of whatever faith they had left in the duo after the ‘Belispeak II’ release simply by glancing at the track name. ‘Grammy’, however, clearly demonstrates the innovative ability of two determined artists, proving that attack is the best form of defence.