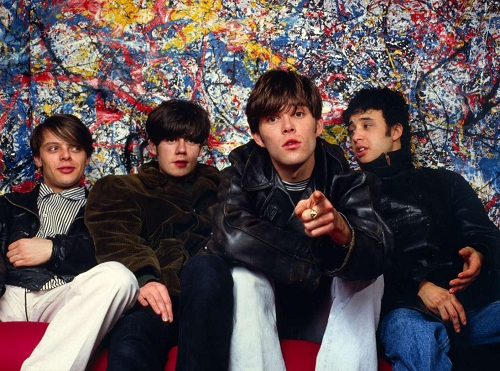 Sorry for the lateness on this one. We meant to post this review months ago but something obviously went hideously wrong and it kind of got lost for a while. We still feel it’s worth posting and it’s a good read none the less.

The three concerts at Heaton Park on the last weekend of June need no introduction. They are simply the biggest concerts of all time, shifting 210,000 tickets in a matter of minutes last October. It was a reunion many thought was the most unlikely of all time (one blogger stated that a Beatles reunion would be more likely than seeing these four share a stage). Yet sixteen years on from their last show, The Stone Roses were resurrected and you were invited.

Going into the homecoming shows, however, not all was well. There’d been fears about Reni being injured before the shows – one tabloid ran a story saying he wasn’t rehearsing with the band – and then at one of the first gigs in Amsterdam Ian Brown took to the stage to announce “the drummer’s gone home, the drummer’s a cunt” to a booing crowd who wanted an encore. Amid this turmoil, reviews were spectacular. Brown was in good vocal shape and Reni, Mani and Squire had the groove that saturated The Stone Roses’ first album and early releases. Heaton Park was a different prospect altogether, though. It was their people. It was their definitive shows. It was seen by many as a sacred pilgrimage: the Arndale Centre at midday in Manchester city centre was full of people sporting bucket hats, men squeezed into jeans that were baggy on them at Spike Island and flashes of paint-splashed t-shirts everywhere. This is the one. The shows was about redemption as well as celebration, too. The Stone Roses ended in a furious storm of chaos that saw each member fall out and the band’s last festival show at Reading 1996 being reviewed as the “long and painful crucifixion”. Everything could have failed at Heaton Park this weekend. Yet it didn’t.

“Enjoy the best band in the fucking world” Liam Gallagher spat as his band Beady Eye exited following their support slot after Bob Marley’s old band The Wailers played. When The Stone Roses came onstage, it was all very low-key. Eerily low-key. They sauntered to their positions. Reni got on the drum kit as Mani picked up the bass and smiled. “You can tell the people with umbrellas aren’t from Manchester” quipped Ian Brown, and then the explosion from Mani’s bass saw 70,000 people dancing hand in hand. It wouldn’t have mattered if Ian’s vocal performance was shocking on opener ‘I Wanna Be Adored’ because no-one could possibly hear him over the crowd.

‘Mersey Paradise’ and ‘Sally Cinnamon’ were next up, proving that the seminal band had produced more than just one album full of classics with Brown breathing “you taste of cherry-ade” into the microphone, almost making up for there being no Glastonbury this summer in just four words. Whereas onlookers may have been disgruntled at the lack of onstage showmanship during the show, it didn’t really matter. People had flocked from miles away just to see the tunes (one couple near me were from Scandinavia) and the band didn’t disappoint.

The explosive moment which indicated just how big these concerts were came at around the half-way point. The spine-tingling power of the ‘Ten Storey Love Song’ riff exploded across the park, triggering a beers-in-the-air and heart-on-the-sleeve movement. John Squire’s finesse proving that he was one of the best guitarists of his generation and it finally hit home to the crowd just how powerful this band were back in the early nineties. Many cynics would suggest the band were merely the right band for the right time, but that’s nit-picking. In truth, The Stone Roses possess one of the most technically gifted drummer-bassist-guitarist trio’s ever in the history of popular music.

A thirteen minute performance of ‘Fool’s Gold’ almost took this idea and rammed it down the throat of every fan, journalist and budding musician in the country and suddenly Liam Gallagher’s quote earlier on in the day doesn’t look so silly anymore. An extended jam between the Squire, Mani and Reni ensues and people watch on, almost silent, admiring the skill of each of them. ‘Don’t Stop’ (‘Waterfall’ backwards) is another pleasing highlight, and for once Brown’s vocals are as good as the studio version. The final six songs of the night are outrageous, however. The colossal riff of ‘Love Spreads’ proves that Second Coming really wasn’t as bad as everyone suggests (75,000 people joining in to yell “Let me put you in the picture, let me show you what I mean” as if it’s a hymn they learn at school) and ‘Made of Stone’ becomes the best song of the night with the breath-taking chorus which leads to everyone falling about arm in arm, telling each other just how much this gig means.

‘This Is The One’ and ‘She Bangs The Drums’ are naturally huge, too, but ‘Elizabeth My Dear’ changes the mood for a minute. “This is for Queen Elizabeast” says Brown, “fucking medieval in the 21st century” before he goes on to sing he “won’t rest until she’s lost her throne”. The Roses may be in it for the money and talks of a studio album may be premature, but you get a sense that at Heaton Park they really did feel like they could still change lives. ‘I Am the Resurrection’ followed and it’s a song that is still stapled in the minds of every Heaton Park attendee as Brown spends the last three minutes of it in the crowd, shaking hands with his disciples and proving he hasn’t lost the common touch.

As the smoke lifted and the mud hardened, however, news of Christopher Brahney’s death seeped through to the fans. Musician’s everywhere gave their condolences regarding the tragedy; the historic weekend was dampened by the news. No-one should ever go to a gig and not return and the news is truly a horrible thought for the thousands who took the same journey as Christopher to see a band that many thought would never reunite. Songs are powerful things and maybe Bob Marley was right: music CAN bring the world together after all.