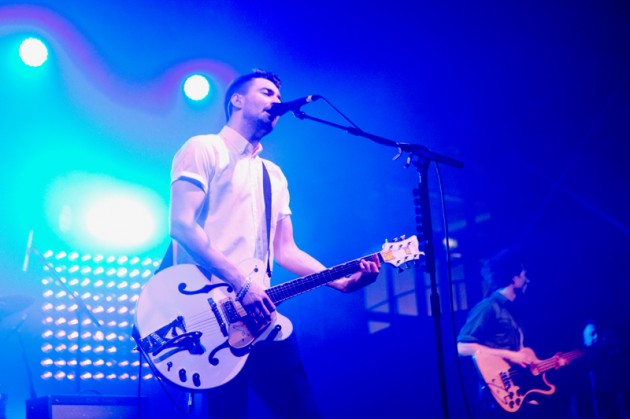 For a band constantly battling little radio airplay, limited support from the music press and being dubbed ‘lad-rock’ and ‘Britpop throwbacks’, The Courteeners certainly know how to impress. Whilst latest record Anna does not match the melodically superior predecessor Falcon, the Mancunian four-piece’s latest tour has cemented their place as one of the few indie rock bands in the country who actually matter. Sure, they don’t have number one albums. And yes, perhaps there’s more boundary-pushing music to be found, but The Courteeners certainly have an adoring public.

Thousands are cramped into Brixton Academy on a damp night in March to see their heroes. It is the type of night which makes you run from taxis to clubs through fear of getting your wax wet and the atmosphere inside the venue in suitably humid. Wafts of spew and Strongbow resonate the air as grown men drunkenly talk with each other about how Liam Fray’s band are “the best in the country…no, world!” and that, despite taking some getting used to, their latest record is “mega”.

Over to The Courteeners, then. Taking to the stage to the best song of 2012 (Tame Impala’s ‘Elephant’), the band are understated and subdued. There’s no strut from the frontman or quips to the crowd. Instead, the band let the music do the talking. Opener ‘Are You In Love With A Notion?’ (and Anna‘s first track) sounds ten feet tall in a venue this large with a mighty athemic chorus and Michael Campbell’s quality as a drummer evident from the outset. The track sets a precedent for the evening with the band roaring through hit after hit at an electrifying pace.

‘Lose Control’ may not be Anna‘s finest offer, but the jangly guitar battle between Daniel Moores and Liam Fray make it a thrilling ride. Old stalwarts ‘Cavorting’ and ‘Acrylic’ encourage the most rowdy scene of the night with plenty of bodies piling forwards and liquids being thrown. ‘Van Der Graaf’ is a thumping ride which shines as Anna‘s finest song and probably the bravest song Fray has ever written. The song highlights the band’s shift musically, with Fray’s melodic Garvey-esque vocal now impressive as opposed to the spike-filled shout of the band’s early days.

Next comes the night’s highlight. ‘Please Don’t’ has always been one of the band’s finest live staples, and tonight it breathes life into the band’s early songs. It sounds brutal and honest, with Fray telling the crowd “this is about when your ex keeps texting you”. Fray prances around the stage in his best Jarvis Cocker impression and his voice is barely audible with the crowd screaming each word back to him.

Other new tracks ‘When You Want Something You Can’t Have’ and ‘Marquee’ sound atmospheric, and it’s a testament to the quality of the tracks that the crowd already know every word and sing along with their arms’ around each other. The band soon depart leaving Fray to strum through some acoustic numbers. ‘Last of the Ladies’ instigates lighters in the air and there is even an atmospheric outing for classic b-side ‘Smiths Disco’, which Fray dedicates to Stephen Fretwell.

“Make some noise for the boys!” Fray declares before being joined by the rest of the band. In the past you would be forgiven for thinking The Courteeners was all about Fray. He writes the songs, the music, he does the artwork and does interviews alone. Tonight, however, it becomes clear that The Courteeners are a true band. Their musicianship has grown and matured making their chemistry electric. “The sun is ours to find” Fray bellows during ‘Welcome to the Rave’, highlighting the fact that Fray has a real knack for writing lyrics which resonate. ‘Not Nineteen Forever’ and ‘What Took You So Long?’ are ingrained in every fan’s mind and they book-mark the end of a terrific chapter for the band.

The Anna tour may be over, but The Courteeners have shown just how important they are. The people have spoken louder than the critics, and as people leave singing the chorus to ‘What Took You So Long?’, I am reminded of another Courteeners lyric: the proof is in the pudding and the gigs. On the strength of tonight, The Courteeners have proved they aren’t going anywhere.