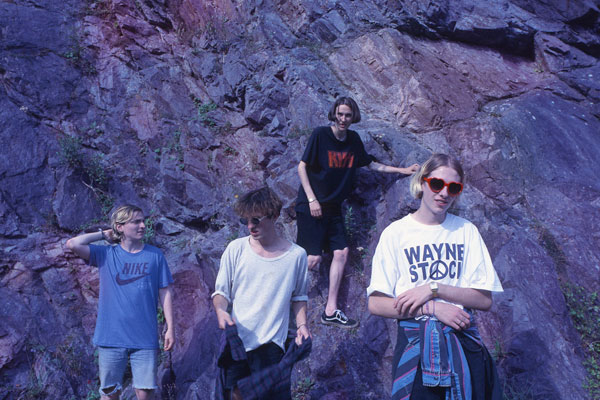 Whilst fellow Birmingham natives Peace may have already adorned the front cover of The Fly and NME in 2013, as well as scoring a top twenty debut album (of which many songs have been lifted and used on every structured-reality-but-not-scripted-we-promise TV show in the country) and finding themselves on the foot of the NME Awards Tour bill, Swim Deep‘s rise has been much more organic.

The band ended last year with a real buzz about them, yes. But Swim Deep market themselves in a way nobody else does: they aren’t professionals and neither are their fans. They just want to make you feel good. The HMV Institute is packed full of hipsters on half-term and skaters who have just stumbled in from the Bullring, making tonight infinitely more important than Peace’s show at the Academy just a few weeks ago. Swim Deep have grown to become a real tour-de-force: summer-inspired tunes, feel-good anthems and bona fide heartthrob status for each band member.

The aforementioned band members all take to the stage one-by-one, and it’s left to frontman Austin Williams to really ignite the crowd. Dressed all in white (fitting seeing the set closer tonight lifts the opening chords from a song of the same name), Williams jumps around exuberantly as he gestures to friends in the audience. He flings on a guitar and Swim Deep are off powering through ‘Francisco’, a track off the band’s forthcoming debut album Where The Heaven Are We.

The album title is emblazoned on the backdrop in gigantic letters, but the answer is easy: we are in the place that Swim Deep matter more than any other. Before the gig, bassist Cavan McCarthy jovially joked on twitter that “they built this town”. He’s not wrong, though. As much as Peace have become the Birmingham movement’s leaders, Swim Deep have the ability to overtake them. Indeed, Peace frontman Harrison Koisser told NME that Swim Deep make him “feel like an amateur”.

It’s pieces of vision like ‘Honey’ which make this statement ring true. The manifesto of “don’t just dream in your sleep, it’s just lazy” is important to everybody in the room tonight, bringing them together to experience great music and great vibes together. More breezy, infectious blasts of pop are run through by the band (‘Make My Sun Shine’, ‘Stray’ and ‘Red Lips I Know’) and will feature on the debut album when it drops next month but tonight is all about a celebration of the past and how Swim Deep got here.

Their earliest track, ‘Beach Justice’ is given an outing and the deafening roars which greet it shows what talent the band members had early on in their career. Their latest b-side ‘Simmer’ also proves a highlight with Zachary Robinson’s drumming elevating it into a more powerful song than on record. “Look up at the ceiling, don’t you see that too much?” Williams breathes into the microphone as another reminder to seize the day.

‘The Sea’ is probably the band’s weakest single to date and comes across as a vague Nirvana pastiche live. The encore, however, is where the band truly show their ability. “Where are the Swim Deepers?” Williams jokingly asks the crowd after introducing everyone to his parents who are up on the balcony. A lovelorn intro to ‘She Changes The Weather’ follows (lyrics: “she makes me trip, the words just fall out of my lips”) before the band begin one of their best ever live performances. From the atmosphere-building keys and drums to the explosion of noise (coupled with masses of confetti pouring onto the crowd), Swim Deep completely own the Institute. Huge movement ensues as Williams struggles to make himself audible. The tune is, undoubtedly, one of the finest of the year.

‘King City’ sparks a mass singalong with escapist “ooh”s and a resounding belief that this band can go anywhere. Williams throws flowers into the crowd as a way of thanks. By the end of the gig everyone is covered in confetti, alcohol, sweat and petals. It is a surreal chapter for the band who used to play to a handful of people in the Adam & Eve pub. As the band say themselves in ‘She Changes The Weather’: “it seems like we’re never getting old”.