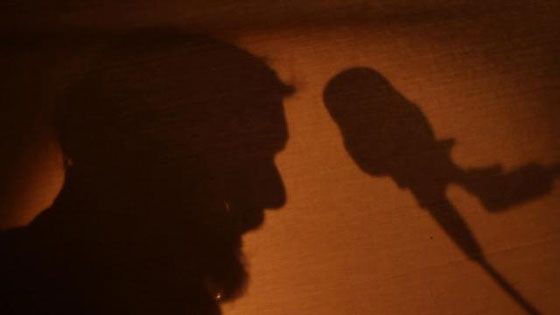 As silence prevails in the first few moments of Keaton Henson’s live stream of a performance titled ‘Forts’, a collective feeling of nervousness, modesty and isolation flutters from Keaton’s weary expression to every member watching. The tension grips unbearably to each until finally he takes one glimpse at the camera, recoils into himself and picks at the first notes of his newest re-released single ‘You Don’t Know How Lucky You Are’. What makes this live stream so special is the rareness of availability to see Keaton perform life – for one who’s melodies and lyrical content span so deep into the realms of memories of heartbreak, lust and depression, he remains pretty much to himself, writing poetry, songs and illustrating. For all that know a little about his character, this moment is particularly nerve-racking.

Keaton reflects very much on himself within the setting, portraying an idyllic isolation which enables him to draw comfort in order to overcome fears and pull on a layer of momentary courage. The disconnection he sets himself from the world is further highlighted by the juxtaposition of the noisy city streets that surround the rooftop where his canvas tepee rests on a carpet of leaves. If this alone does not render such sensitivity then the music is enough to shatter even those with the most preserved emotions.

Sliding effortlessly from his shell, Keaton metamorphosizes into a very open and personal individual and from being himself controlled by the silence now floods the silence to each room of the audience who sit entranced by far from simplistic strumming patterns and lyrical melodies. With a re-release of his album Dear… later this year, Keaton plays through ‘You Don’t Know How Lucky You Are’, ‘Strawbear’ and ‘To Your Health’ (A very interesting version can be found over on vimeo with a spell-binding video) without saying a word but leaving it all to his music, which reflects his true state of mind.

Keaton Henson is not an artist you can criticise and though hopefully I’ll one day get the chance to see him perform live, it is the fragility of his character and life that makes his music so beautiful. Every message of heartbreak and regret (listen to ‘Nests’ or ‘Small Hands’) is echoed in the minds of everyone who’s ever felt they’ve love. A Romantic rendition of a thousand lives.