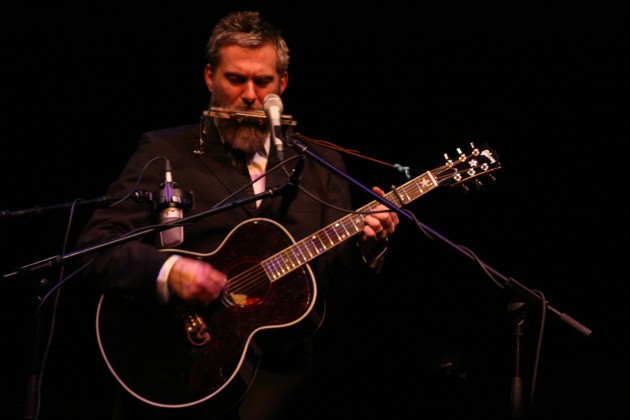 2012 was a pretty good year for Ethan Johns. He recorded and released his debut solo album, If Not Now Then When?, and won the Brit Award for Best British Producer. Music very much runs in the family; Ethan’s dad, Glyn Johns, produced music for The Rolling Stones, Eric Clapton, and Led Zeppelin, among others. The move from producer to solo artist was long awaited. Having worked with the likes of Laura Marling, Ryan Adams, and The Kings Of Leon, this was a much encouraged venture. And the album title suggests that the time was now.

Opening for Johns, and as a preamble to her own headline tour, was Marika Hackman. Her set list sticks fairly closely to the track order to her own debut, That Iron Taste. ‘Bath is Black’ was closely followed by ‘Mountain Spines’, and an introduction, “sorry, I always forget to introduce myself.” Hackman seemed uncomfortable with how quiet the room was while she sang; we were awfully polite. Telling us that her mother has enquired when she will stop writing depressing songs about death, Marika announced her next song would be ‘Cannibal’, barely releasing the humour of her own words before the audience let out a collective chuckle.

Ethan’s stage presence is much more confident, his anecdotes natural. Praising our venue, city, and St. Benedict’s Street’s record stores, we are welcomed (and told to behave. Someone tarnished our politeness record by talking). Johns also began with the first track from his own album, ‘Hello Sunshine’. When asked if anyone knows the album, only a few people are confident that they have. It was only released on CD a week before, though, so unless there were a lot of vinyl lovers and iTunes users in the room, this was unsurprising.

Demonstrating his eclectic music skills, throughout the gig, we see two guitars, a piano, a harmonica (Bob Dylan signature), and an iPhone which plays the role of drummer used skilfully and to great effect. Johns is the modern one man band. The diverse range of instruments might not seem entirely necessary (the piano and harmonica were only used for one song each), but the range of genres which accumulate to form Johns’ style require it. From protest song (‘Rally’) to blues (‘Morning Blues’) and folk (‘Whip Poor Will’), each style is executed with precision and passion.

If Not Now Then When? is out now on Three Crows Records.

Tagged with → Ethan Johns • Glyn Johns • If Not Now Then When? • Marika Hackman • Norwich Arts Centre • That Iron Taste