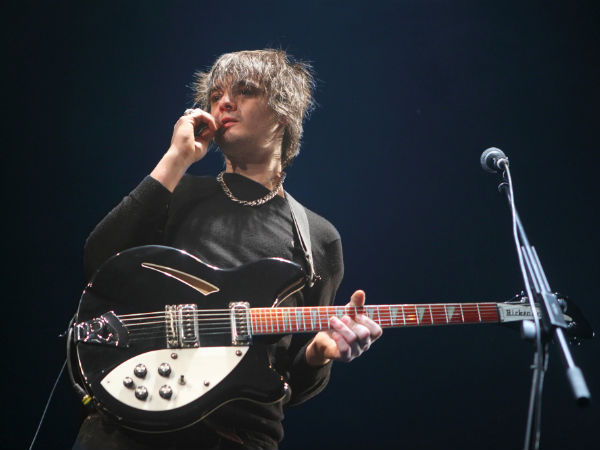 There’s a certain beauty to things which divide, isn’t there? Much like Marmite and Robbie Savage, often you need to take your hat off to the subjects in question. They don’t pander to anyone. Take it or leave it: this is them. As such, if you’ve found this page, you’ll probably have an opinion on Peter Doherty. Whether you fall into the “he’s a tortured genius! The press are out to get him! Now pass me my copy of Dorian Gray” or the “he’s a talentless junkie! He cheated Kate Moss out of her best years! Scrub him in bleach!” camp, the chances are you will be passionate either way. With the ex-Libertine and sometime Babyshambles front man, there really is no middle ground. Fittingly, tonight at Brixton’s O2 Academy, his band’s return to the capital is suitably glorious and ghastly in equal measure.

On the train to any Doherty related event, there is a certain trepidation that lingers within. Will he turn up? Will he be smacked up? Will the woman opposite you stop eating her crisps so loudly? Thankfully, tonight Pete does turn up: fifty minutes late. When Babyshambles take to the stage, it’s all strangely low-key. They are introduced by a friend of the band (who bizarrely thanks the crowd for “eradicating poverty” as if all Bono has had to do over the last thirty years is doff a fedora and rob his band-mate’s flat) and Pete blows a cheering mob of likely lads and Arcadian dreamers a few customary kisses.

Tearing into Shotter’s Nation‘s ‘Delivery’, you get a sense of how tight the band’s musicianship can be. Whitnall and Doherty’s guitars compete for victory as Whitnall’s bouncing bassline gives the madness some structure. ‘Nothing Comes To Nothing’ represents the finest songwriting on the new album, with its La’s-ian riff and seasick atmosphere. It is easily the most radio-friendly the band have ever sounded and this translates itself live, gliding through the room merrily before ‘Carry On Up The Morning’ delves further into the ‘Shambles back-catalogue.

Off the back of the release of the band’s third album Sequel to the Prequel, Babyshambles are intent on airing as much of the record as possible. The ska-infused rowdiness of ‘Dr No’ is an irresistible highlight, with Whitnall’s bass and backing vocals becoming increasingly vital as Doherty prances around on-stage as if he is living in some rudeboy Coventrian haunt during Thatcher’s Britain. The song is a fine piece of work which sees the band showing a different hand altogether, before an explosive rendition of ‘Farmer’s Daughter’ shows how powerful Doherty’s voice can be. The track is hugely impressive live, corresponding exceptionally to the size of the venue and further cementing the notion that Doherty still has one of the best ears for creating sharp blasts of indie anthemia.

‘Fall From Grace’ contrastingly shows Doherty in pensive and reflective mood (sample lyric: “can we go some place they won’t know my face?”) and could be perceived as an overt allusion to his problems over the last eighteen months (you know, the small matter of his best friend’s death, a prison sentence, a terrible film appearance, getting kicked out of rehab, court appearances and the fact Robin Whitehead’s death continues to linger over him like Raheem Sterling giving Peter Crouch a piggy-back ride). ‘Fireman’, the latest album’s opener, is frenetic and fast-paced but comes across as too much of a ‘Horrorshow’ pastiche to be enjoyable.

A much better song is ‘Penguins’, one of Sequel to the Prequel‘s finest offerings, with tales of “Saturday night turning into Sunday morning” before Doherty mischievously suggests he “doesn’t like your boyfriend’s face” whilst bragging that he’s “going to try to take his place”. It’s the old guard which remains the most warmly received, with ‘Killimangiro’ sounding as colossal as it did all those years ago. The thumping nature of the drums and that unmistakable riff is at the core of the enjoyment of the night: for years, these songs have soundtracked our nights in dirty dance floors across Britain. Now, Doherty is delivering them with aplomb and gusto.

Sadly, as ever with Doherty, disaster is always just a crack-pipe away. The crowd are treated to ‘Loyalty Song’ and ‘8 Dead Boys’, before at the end of the latter Doherty decides it’s time to have some fun and he runs head-first into the drum set. The kit falls around everywhere, with Whitnall looking bemused as cymbals sprawl off to each flank of the stage and Doherty apologetically kisses a drum stick. It’s all very forced and feels slightly inevitable, but Doherty’s in his mid-thirties now, shouldn’t he be watching The Great British Bake Off and wearing Converse with jeans?

A touching rendition of ‘Picture Me In A Hospital’ follows (with a brilliant violinist joining proceedings) and McConnell and Doherty have a meaningful embrace at the song’s climax. McConnell, of course, is lucky to be here tonight at all following the motorcycle accident which threatened to not only curtail his wonderful career, but curtail his ability to walk too. ‘Pipedown’ is the song of the night, urgent and vibrant, causing huge movement in the crowd as Shoreditch poseurs hit each other in the gob in contention to ascend from the carnage as Brixton’s Biggest Likely Lad.

Due to the late start, Doherty then tells the crowd they’ve only got time for one more. “Boo!” comes the response from the dehydrated space-eyed fans, before Pete asks them kindly what song they’d like. “Albion? Sequel to the Prequel? New Pair? Fuck Forever?”. The answer is obvious. McConnell gears up his guitar and Doherty engages in a massive crowd pleasing moment in which he throws his hat into the crowd before declaring “I can’t tell between death and glory”. The song sounds as huge as it ever did, obviously.

With tunes like that, it’s not hard to argue with Pete being a songwriter of his generation. The floor is sticky, the toilets are smelly, the tube station is cold and the train home is long. But will you be doing it all again in a few months time? Of course you will: because love him or hate him, you can never take your eyes off him.